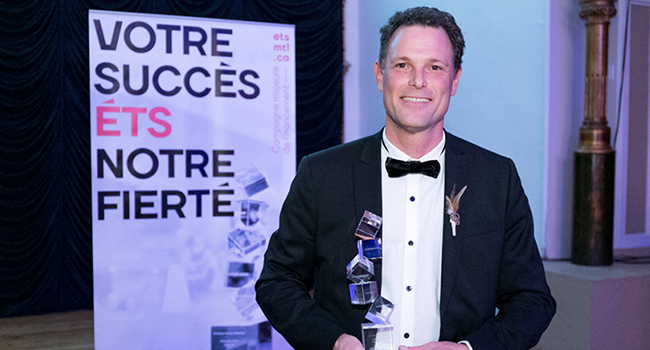 AV&R is proud to announce that its Chief Executive Officer, Mr. Jean-François Dupont, won the FÉRIQUE “Coup de Coeur” Prize during the 2016 ETS Ambassadors’ Gala. He also won a prize in the category Ambassador Entrepreneur. This prize is a special honor awarded to the Ambassador who distinguishes himself the most by the exceptional character of his professional and social achievements. The evening, held last Friday at Salon 1861, was a great success, mostly thanks to several participants who supported AV&R and its leader.

The entire AV&R team would like to thank all the ETS’ graduates who have voted for Mr. Dupont, who claims to be “really honored to have won this prize awarded by the ETS.”

We also would like to thank all our sponsors, which, by their support, have allowed AV&R’s keys employees to surprise Mr. Dupont by being alongside him during the event. Stéphan Bureau, the host of the night, even qualified the team as a real fan club! This wonderful surprise would not have been possible without you and the evening was even more memorable. Thanks again!

For an evening overview, the official event’s photos gallery will be posted online here. ­­