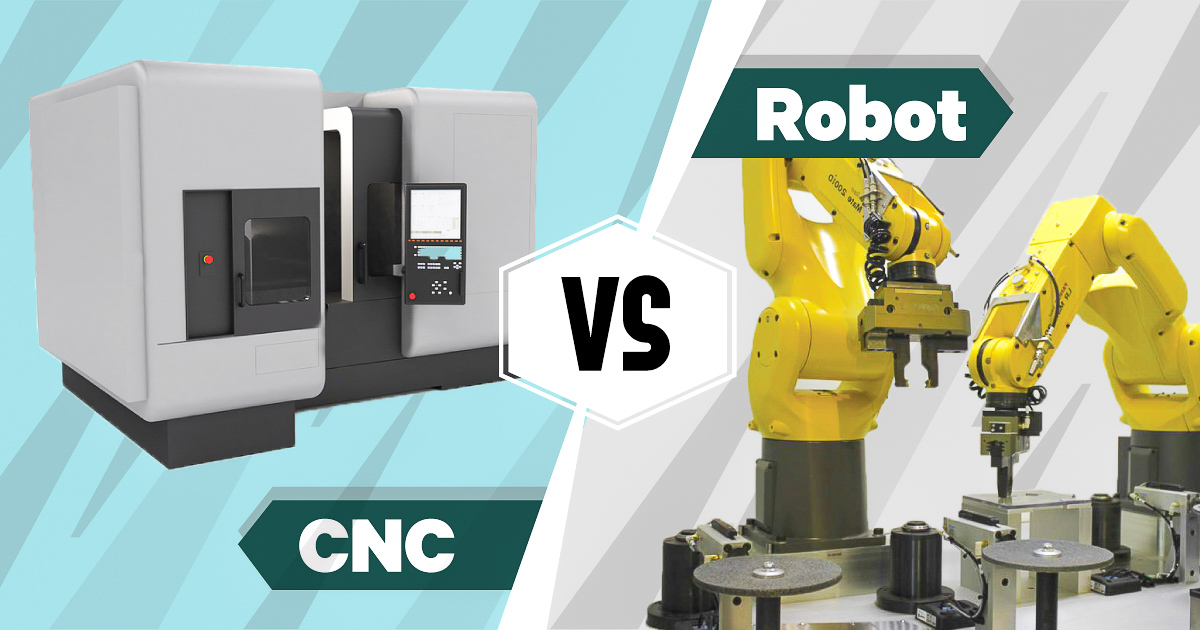 Why Does Robotics Have More Advantages Than CNCs?

Since the industrial revolution of the nineteenth century, industries have increasingly turned to the automation of production lines. This industrial automation consists of the use of techniques to ensure the operation of machines with limited human intervention. It has taken different forms over the years and has undergone significant innovations in the 1960s. During this period, the first numerically controlled machine tools, called CNC when controlled by computers, were developed and rapidly integrated into industrial production chains. At the same time, the first industrial robots were invented. These multi-arm systems allow automatic control and reprogramming while being manipulatable on multiple axes. The industrial applications are vast: welding, surface finishing, assembly or painting. The integration of CNC and robotics has subsequently been done on a large scale in many industries, including automotive and aeronautics.

FANUC is an international company highly focused in servo control for both CNC and Robotics and involved in applications from aerospace to woodworking. FANUC offers industrial robot and supporting technologies for almost any application with payloads ranging from 0.5 kg to 2,300 kg. Norbert Boch, who heads up the relationship with a number of key integrators as part of the Authorized System Integrator Sales organization at FANUC Canada, says: « The industry will continue to have a strong demand for both CNC and Robotic technologies. » He believes the key for anyone approaching an application is seeking to work with the companies who are at the forefront of building software and technology on top of robotics and CNC’s. According to Norbert Boch: « There are no easy applications anymore and working with the right company will greatly increase the chance of success tackling these next challenging applications. »

What are the differences between these two CNC and robotics systems? What are their characteristics and how do you determine which one is best suited to the needs of your industry? Looking at the aerospace industry and more specifically in automated surface finishing, we will detail the advantages and possible disadvantages of CNC and robotics.

The principle of a CNC machine tool is to work accurately from a fixed position. Concretely, the machine maintains the position of the part on which a process is applied. The different tools are then programmed to move and work on the fixed part. The industrial operator must perform various manual steps to operate the CNC: opening the machine, depositing the workpiece (one at a time), screwing the workpiece on the base provided for this purpose, closing the machine, reopening at the end of the cycle, and finally unscrewing to remove the finished part.

Unlike the CNC, the robotic system grasps the workpiece at the end of its mechanical arm in order to move it and bring it to the different tools for the application of the process. This is called pick and place. The action of industrial operators is largely simplified thanks to filing drawers to accommodate several parts. Once loaded, the operator just has to close the drawer and start the process. The robot is responsible for processing all the parts, one after the other, in an automated way. At the end of the cycle, when the parts are finished, they are directly recovered by the operator in this same loading drawer. Robotics therefore saves significant operator time compared to CNCs.

A case of precision and repeatability

CNC machine tools stand out as champions of precision. The fixed position of the part and the programming of the different tools that act on specific points of the part are what allows the CNC to offer such high precision.

Robotic systems are not left out, however. Thanks to force feedback technology, the robotic system adapts the positioning of the part to the tools to meet production requirement and achieve a very high level of precision.

One of the disadvantages of CNCs lies in the risk of variations in the shape of the parts. Although not all parts are identical, the CNC machine tool works equally on different, specifically programmed points. The direct consequence is a potential unstable process and non-repeatable results.

The instability of the results is corrected by the robotic system. The combination of force control technology, tool speed control, the use of measuring tools as well as robot movement ensures identical results on every piece. The process repeatability is therefore one of the major advantages of robotic systems.

Robots are now being built to be able to maintain the high precision requirements demanded by the aeronautical and other high accuracy industries.

Precision and force control of robotic systems have a major impact on the amount of materials used to perform the process, such as abrasives, which is significantly lower than CNCs. The amount of waste generated is also reduced and minimizes the elimination and cleaning actions. As a result, system maintenance is simplified.

In addition, CNC machine tools create a very fine abrasive dust which, during production cycles, settles between the workpiece and the tool. The consequences are reduced accuracy and premature wear of the machine. In contrast, the robotic system has a dust collector that prevents premature wear and ensures consistent accuracy.

To learn more about adaptive technologies, check out our blog post at https://avr-aerospace.com/adaptive-technology-progression/

The movements of the robotic arm on 6 axes allow access to areas that are difficult to reach. This is particularly the case in the aeronautical industry with access to specific areas of critical aircraft engine parts such as blades (platform area, fillet radius, other).

The primary reluctance to use robotic systems on production lines concerns the programming knowledge necessary for the operation of these highly technological systems. Manufacturers are worried about the hours required for the training in programming of their employees to control and optimally use robots. Fortunately, some manufacturers of robotic systems have developed computer software that allows control of processes and machines. This software has the advantage of requiring minimal training of the operators and allows them to control the machines without any programming knowledge.

To conclude, the differences in the characteristics of CNCs and robotic systems are numerous. Whether in terms of precision, repeatability, adaptive technology, accessibility to new areas on parts or waste management, robotics appears to be a more effective solution. The natural reluctance to use robots, on account of software programming needs, is now being eliminated by innovations that allow everyone to use robotic systems. Democratizing and humanizing robotics is now commonplace in the industry. The aerospace industry thus gives a clear advantage to robotic systems that have become standardized in production lines, in particular to meet increasingly demanding technical requirements and production rates.