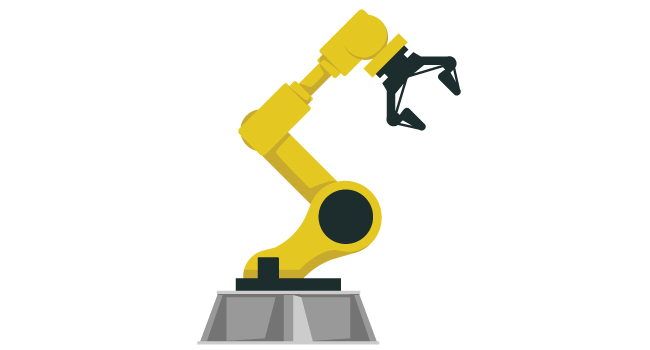 The evolution is constant in all areas. Automation is no exception. Where there used to be gliders and the Wright Flyer, today we have planes with jet engines, autopilots and supersonic jets.

From automation is born robotics. In manufacturing plants, we encounter robots that paint cars, others that assemble electronic circuits and even robots who perform high-precision finishing of jet engine parts. Of course, robotics has evolved, but as advances in technology normally simplify the use, robotics became more and more complex. This problem recently got blatant, forcing the world of robotics to react.

Converting a manual process into a robotic one is not an easy task. Several contributors are needed to conceptualize the machine and program the robot and all the interactive elements required. Indeed, the process expert, that is the one who performs it manually, has a lot of relevant data for the machine conception. Whether it is the choice of tools, the layout of the elements to minimize travel time, etc., his contribution is essential. But he could not automate the process without the help of a robotics expert and a qualified PC programming individual.

This model, although functional, is far from simple to get! It requires the input of experienced workers that the factories unfortunately do not always have at hand. In addition to the lack of skilled labor in robotics and PC programming to do this work, factories rarely have the means to hire them. Their viable option is to use an automation integrator. Due to the complexity of the robotic systems, and therefore the impossibility to make changes without the experts, the factory will be dependent on this supplier for the rest of its life. The urgency of an alternative solution is obvious here.

To Simplify It All

Several companies have developed solutions to overcome this technical dependence. For example, FANUC, one of the largest industrial robot manufacturers in the world, invested in education for a long time by providing robots to universities to allow students to learn how to program them. This year, the way FANUC America approaches the issue has evolved; they enter technical schools and even high schools, not only to form students younger and younger, but also to ask them to improve their robot programming interface, to make it simpler.

Meanwhile, AV&R wanted to simplify the programming of its robotic machines, both the robot and PC elements programming, by creating the BrainWave software. This one allows an operator without programming knowledge (both robot and PC) to make modifications to the robotic process. BrainWave works a lot like Lego blocks; the operator chooses the fully preprogrammed block he wants to use and simply inserts it into the sequence to be performed. This method empowers operators by offering more autonomy and flexibility, allowing them to modify existing machine settings and even add new ones, without programming.

This model, somehow much simpler, remains relatively complex compared to what we see every day. Let’s make the parallel with IT: as much as we worked in the DOS operating system on our computers, this simplification step is like the arrival of Windows. Although Windows is much easier to use, there is still some complexity, illustrated by the inefficiency of unaccustomed people, such as young children or the elderly.

The Apotheosis of Simplification

What is easier to use than Windows? Look around you, you’ll see the answer for sure: tablets and smart phones. Put an iPad in the hands of a 7-year-old and he will know how to download an application. Robotics now tends towards this ultra simplified use. Would not it be great if an operator could robotize a process as easily as we install Snapchat on our cell phones?

The work in this direction is initiated and took shape by collaborative robots, easily programmable by moving them with the hands. Even though these robots are already used in some factories, their level of accuracy is not high enough to replace processes requiring a high level of precision. Hence, it will take time before these robots can be used in high-precision finishing of jet engine parts!

Finally, robotics is in full democratization and the robot manufacturers are in the race to create

“the” collaborative robot that will become the inevitable. Like Apple and IBM, like HD-DVD and Blu-Ray, Like iPhone and Blackberry, we can only wait to see. But in the meantime, let’s go up the first step of the stairs: take experience in automating our processes. Our quality of life at work will be increased now and it will only be easier to update our robotic processes when the technology will be ready. Even though we are all dreaming of a self-driving car, the current option is self-steering and automatic parallel parking, which is a step in the right direction.