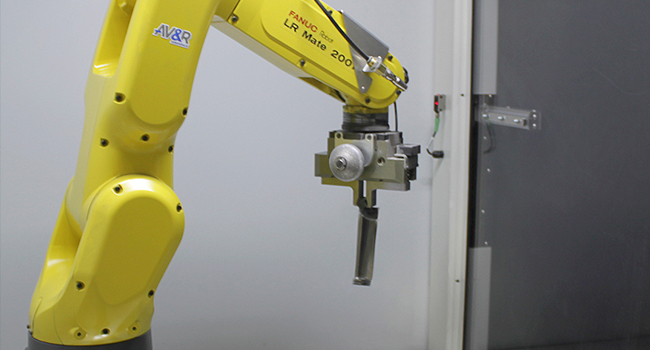 Aerodynamics is the crux of the matter in an airplane engine. The more aerodynamic blades are, the more efficient and fuel economical the engine is, saving astronomical sums for the airlines. The design of the blades is obviously made with this aspect in mind, but when it comes to manufacturing them, it gets complicated.

Since several years, motorists equip themselves with robotic adaptive systems to profile with high precision forged and machined blades and even to recreate profiles of used blades (MRO). Recently, motorists investigate casted blades. In the race for perfect aerodynamics, the limits of the molds are becoming apparent, especially on the blades’ trailing edges.

Why the Trailing Edge?

This phenomenon is also present in aircraft engines. The wake turbulence of the blades has an impact on engine efficiency and fuel consumption. While trailing edges of forged and machined blades are constantly reworked, this interest in the casted blades of the hot section of gas turbines is pretty new.

Still and always, technological limitations hinder the achievement of perfect aerodynamics; the molten metal introduced into the molds has a viscosity that does not allow it to fit into a very thin mold. The design of some blades requires a trailing edge about 0.75mm thick (at ± 37.5um), which is too thin for the molten metal. Thereby, manufacturers have no choice but to thicken the molds so that the material goes in, and then remove the excess material to meet the tolerance requirements.

And even if a thin mold could be filled, the variations of the casting process are greater than the required repeatability tolerances. It would still be necessary to machine the blade when it leaves the mold.

How to Thin the Trailing Edge?

Let’s take the example mentioned earlier asking for 0.75mm blade trailing edge thickness with a tolerance of ± 37.5um. How to get there? We all know the limitations of manual work, so let’s move on. Using a CNC that includes adaptive technology is a viable solution. Applying the existing technology of adaptive profiling of machined blades to trailing edges also works very well, while greatly reducing costs to automate it.

In these systems, wheels are used to thin the trailing edge. As the picture below shows, removing material from the outer side of the part can be done with a larger wheel. The use of a large wheel is preferable for motorists because it requires less handling time in tool change, less abrasive costs, etc. 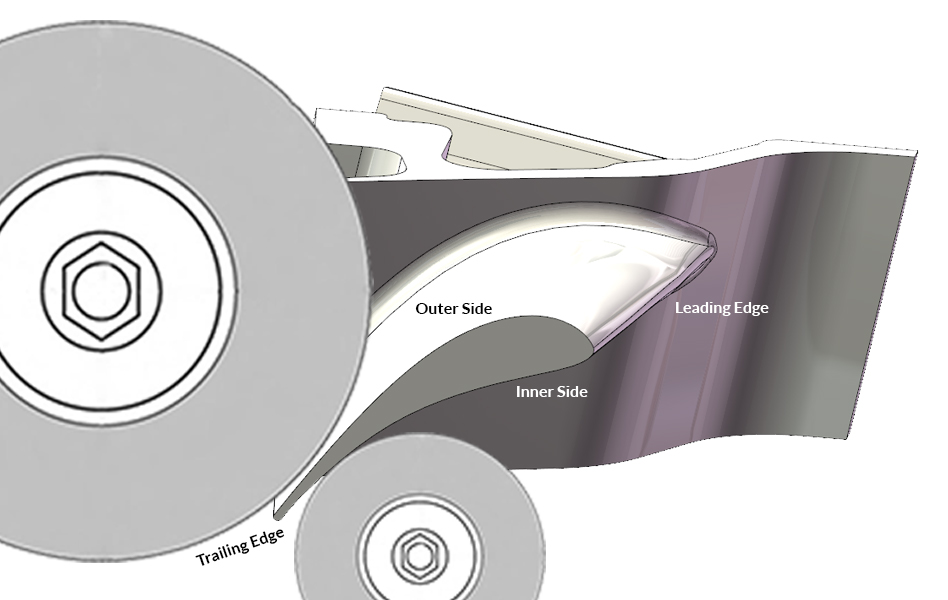 It would be possible to minimize the use of small wheels if the mold had the perfect shape on the inner side of the blade and the extra space, needed for the molten metal to be inserted into it, was put outward. Thus, only the outer side would need to be machined to achieve the required tolerances and the finish would be greatly optimized. But how to make the molds so modified? Here we come up against a paradigm shift in the design and the manufacture of gas turbine blades.

Since few years, automation requires paradigm shifts for manufacturers everywhere. A great trend is emerging from the changes in aerospace: a dialogue between designers and manufacturers must exist. The current example does not derogate from this fact. In an ideal world, designers would work together with manufacturers to create the most aerodynamic designs possible based on existing technologies. It is important that this dialogue be continuous because, thanks to constant innovation and technological advances, who knows what the manufacturers will be able to do in 10 years!

On a smaller scale, today we are experiencing a paradigm shift for engine manufacturers concerning castings. Previously, casted blades were considered to have a perfect shape. Now that technology to improve their aerodynamics exists, they are becoming equally strategic in the race for efficiency and minimal fuel consumption.