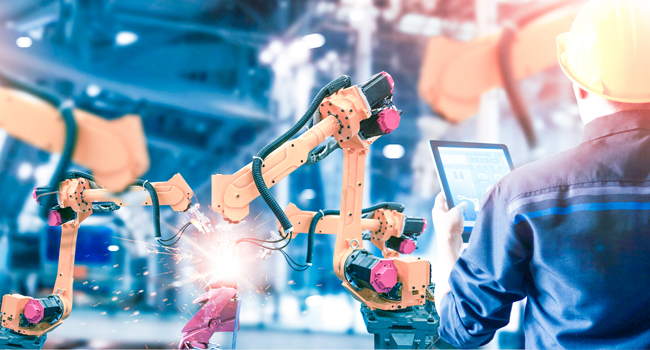 Point of view of a robotic expert

COVID-19 is disrupting the world by having an unprecedented impact on the global economy. In order to respect governmental rules, workers from manufacturing companies are confined at home. Hence, factories are temporarily shut-down and need to adjust to respect the social distancing measures.

The current crisis management has highlighted the use of robots in some industries such as the medical sector with robotic medical assistant used for carrying supplies and to disinfect patient rooms. The robot perception is evolving in public opinion and within industries who are considering the use of robots on a larger scale.

What is the COVID-19 impact on global manufacturers? Can robotics and automation bring realistic solutions?

In this article, we are going to present our views, as a robotics expert for over 25 years, based on discussions with global manufacturers, partners and other robotics and automation companies.

Evolution of the Global Supply Chain

The current crisis calls into question the globalization of the supply chain. Indeed, the decentralization of production in many industries, including the aerospace industry, is now emerging as a vulnerability. With the temporary shut down of factories in some regions of the world, the entire supply chain has come to a standstill, jeopardizing manufacturing production.

One of the solutions to resolve these issues is to relocate a portion of the production to local factories. In the coming months, the resurgence of the epidemic in certain geographic areas is a scenario envisioned by scientists, which could result in the confinement of these same regions. The dispersal of factories around the world would allow manufacturers to transfer production of their parts quickly, thus avoiding a complete disruption. The supply chain will remain global but would rely on local flexibility.

Robotics: A Solution to the Current Production Issues

Since the beginning of the crisis on March 2020, manufacturers are attempting to quickly adapt in order to resume their production. Physical distancing as the new regulation will not be possible in every factory due to lack of space. Robotics and automation are offering concrete solutions to adjust the production lines.

The use of robotics, and more broadly automation, is a response among others to the disruptions experienced by manufacturing industries around the world. Companies are uncertain about the level and type of activities for the years to come. How fast will the economy achieve the pre-crisis growth level? Will consumption habits and ways of working be radically changed, or just temporarily adjusted? Despite these uncertainties and their impact on production management, we can consider robotics and automation as an important portion of future investments by global manufacturers.

Contraction of collaborative robot, cobots are complex machines which work hand in hand with human beings. In a shared work process, they support and relieve the human operator. During the last years, tools keeping operators safe while working with cobots were developed significantly. Becoming easier to set up and to program, they represent a valuable automation solution.

Mobile robots have the capability to move around in their environment and are not fixed to one physical location. Mobile robots can be “autonomous” (AMR – autonomous mobile robot) which means they are capable of navigating an uncontrolled environment without the need for physical or electro-mechanical guidance devices.